Sunil Gavaskar reckons MS Dhoni would play the Tata IPL 2023: The discussions and debates on Mahendra Singh Dhoni’s participation in the next season of the Indian Premier League (IPL) get initiated every time the IPL approaches its end. This time as well, after CSK has been knocked out of the tournament, the debate amongst the fans and experts is on with different people coming up with their views.

Former Indian cricketer Sunil Gavaskar has also joined the party as he feels that MS Dhoni is certainly going to play in the Tata IPL 2023. Gavaskar backed his thoughts saying, he is “still enthusiastic about the game.”

“Well, I mean, look at the way he has played. He is clearly showing he is very keen, still enthusiastic about the game,” Gavaskar told Star Sports after Mumbai Indians (MI) showed an exit gate to Chennai Super Kings (CSK), last night.

Chennai Super Kings (CSK) lost against Mumbai Indians (MI) by five wickets in the Wankhede Stadium which was enough to eliminate them from the IPL 2022 playoff race.

MS Dhoni remained the top run-getter for CSK in the match with an unbeaten 39 runs in 33 deliveries. While Dhoni held one end, the other end was busy with tumbling wickets.

“On the field, it was quite telling today. He was running from one end to the other end, which means he was keen. He senses an opportunity when those 2 or 3 early wickets fell. We have seen him doing this very regularly.

Gavaskar referred to MS Dhoni’s famous one-liner cheeky reply – “Definitely Not” – to broadcaster Danny Morrison’s query back in IPL 2021, “Could this be your last game in yellow, MS Dhoni?”

“Which means ‘definitely not’. Yes (he will continue), that is exactly what he said when he was asked about it (in 2020),” Gavaskar added.

Interestingly, earlier in this season as well, commentator Danny Morrison came up with his question “whether MS Dhoni will play in the next IPL season or not?” to which Dhoni himself replied, “You’ll definitely see me in the yellow jersey, whether it is this one, or some other one, you never know.”

ALSO READ: Hip Injury rules out KKR pacer Pat Cummins for the rest of the IPL 2022 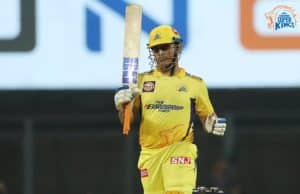 IPL 2022: Devon Conway DRS Controversy. Why No DRS in IPL?