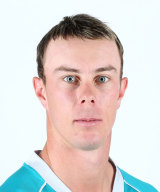 Chris Lynn’s Profile: Chris Lynn was one of the first Australian players in his prime to turn his back on first-class cricket to become a white-ball specialist. It did not hinder his selection for Australia at T20I and ODI level but his inconsistency at international level saw him miss out on the 2019 World Cup after being seen as a potential asset for the previous 18 months. In 2018-19, he became the BBL's all-time leading run scorer and took over from Brendon McCullum as captain of the Brisbane Heat.