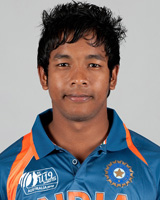 Akshdeep Nath’s Profile: A technically correct batsman and part-time medium-pacer, Akshdeep Nath rose through the junior cricket ranks in Uttar Pradesh. He was a vice-captain of the India side that won the Under-19 World Cup in 2012. In the 2011-12 season, he led Uttar Pradesh U-19s to victory in the Vinoo Mankad Trophy (50-over competition) and finished the tournament as the second-highest run-getter with five half-centuries in the tournament, including 88 in the final against Madhya Pradesh. He scored one century and three fifties in the 2011-12 Cooch Behar Trophy leading Uttar Pradesh U-19s into the semi-final. A first-class debut in 2012 promised bigger things, but a combination of poor form and healthy competition for places saw him play just six matches in his first five seasons.