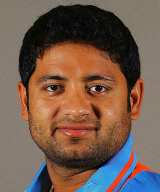 Piyush Chawla’s Profile: Piyush Chawla is one for early impact. As a 15-year-old he represented India Under-19 and Uttar Pradesh U-22. Before he made his first-class debut, at 17, he had already bowled Sachin Tendulkar with a googly in a Challenger Series match. In his first first-class season, he took 35 wickets and scored 224 runs to help UP win their first Ranji Trophy. In his teens he played two Test matches too, against England and South Africa. He took three wickets on ODI debut in Bangladesh in 2007, and 14 during India's tour of Ireland and England the same year, often troubling Kevin Pietersen with the googlies and the straighter ones.