Hardik, Shikhar in line to become Indian’s skipper for T20I series against SA: All-rounder Hardik Pandya and opener batter Shikhar Dhawan are in selector’s target to hand team India’s captaincy role for the home T20I series against South Africa and away series against Ireland as the senior players will be given much-needed break from competitive cricket.

The home series against South Africa for five T20Is will begin on June 9 while India’s tour of Ireland for 2 T20Is will kickstart on June 26. The squad for both tours is expected to be rolled out on May 22nd.

Notably, the likes of Rohit Sharma, Virat Kohli, KL Rahul, Jasprit Bumrah and Rishabh Pant will be given rest for the two subsequent series as a part of their workload management. The aforementioned players are constantly playing cricket for the last couple of months and BCCI wants all of them fresh for the tour of England, starting July 1.

“All the senior India players will get at least three and half weeks of complete rest. Rohit, Virat, KL, Rishabh and Jasprit will all directly go to England for the ‘fifth Test’ following the white-ball series. We need all our key players to remain fresh for the England series,” a senior BCCI source privy to the development told PTI on the condition of anonymity.

It has been learnt that Shikhar Dhawan, who has led team India in absence of Rohit, Virat and Rahul in the past, along with Hardik Pandya, who has been impressive in his maiden stint as the captain of the IPL franchise – Gujarat Titans, are in line to lead the men in blue for the two upcoming shortest format tours.

“The selectors have a couple of choices. Shikhar Dhawan, as he has already captained India in absence of Virat, Rohit and Rahul during last year’s Sri Lanka series. But Hardik Pandya’s impressive captaincy for Gujarat Titans hasn’t gone unnoticed. So it will be a close call,” said the source when asked about the choice of leadership.

Umran Malik is too raw to be handed India debut:

It is further understood that pace sensation Umran Malik is too raw to be given a maiden call for the national team. Though his 150 plus bolts have generated a fair bit of excitement amongst everyone, however, a couple of India A tours would help him discover himself and get better with his strengths.

Lucknow Super Giant’s left-arm pacer Moshin Khan has reportedly excited the selectors with his brilliant pace, bounce and swing and is in the mix to get a maiden call-up in the T20I squad.

“Mohsin has impressed almost everyone with his pace, bounce and swing in this edition. He does have a chance. Having said that, not ruling out Umran or Arshdeep either, but Mohsin might just be slightly ahead,” he added.

It is important to note that Suryakumar Yadav, Ravindra Jadeja and Deepak Chahar won’t be named in the squad due to their respective injury concerns. All the three cricketers are ruled out of the Tata IPL 2022 and are undergoing their rehab program. 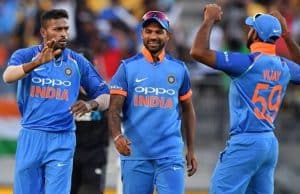