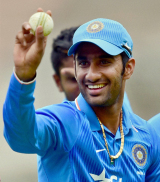 Gurkeerat Singh Mann’s Profile: Gurkeerat Singh's stocks as an allrounder rose significantly in 2015 through displays of his big-match temperament. He made a match-winning 87 as India A's finisher in the tri-series final against Australia A in August, and in September his offbreaks raked in a five-for against the touring Bangladesh A side. Gurkeerat carried that form into the 2015-16 Ranji season, striking an unbeaten double-hundred for Punjab against Railways, and in the next match he took a match haul of nine wickets against Andhra. Those performances earned him a berth in India's Test squad for the home series against South Africa in November-December and at the start of 2016, he was on the plane to Australia with India's limited-overs squad, and made his ODI debut in Melbourne.