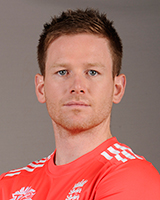 Eoin Morgan’s Profile: Eoin Morgan became England's ODI captain in slightly chaotic circumstances less than two months before the 2015 World Cup and was less than enamoured with an entirely inadequate campaign. What he observed, not just from his own side's lacklustre display, but the inspiration provided by Brendon McCullum's New Zealand side, convinced him an entirely new approach was necessary, with a policy of no fear (and no retribution) at its heart. It required a man of strong will not just to say it, but to implement it, but Morgan did so, seeking to fashion an England side that would play with courage and be impervious to pressure or criticism.