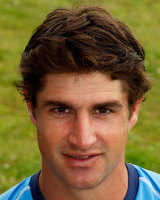 Colin de Grandhomme’s Profile: A bruising, broad-shouldered batsman, and a disciplined medium-pace bowler, Colin de Grandhomme left Zimbabwe for Auckland in 2006, before eventually finding his way into New Zealand's representative teams. Unsurprisingly, his first international foray was in the T20 format. Having earned a reputation as a heavy hitter in New Zealand's domestic T20 competition, de Grandhomme earned a debut against his native Zimbabwe in 2012. He did not sufficiently impress to keep his place on that occasion, but continued to flourish on the domestic circuit.