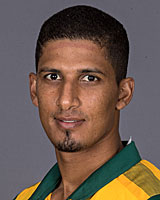 Beuran Hendricks’s Profile: Beuran Hendricks hails from Belville Cricket Club in the Cape and was nurtured through the ranks in the province. He first represented them at the end of the 2010-11 season, when he was just 21. His ability to bowl at pace - in the 140s kph - and swing the ball was what caught the eye.