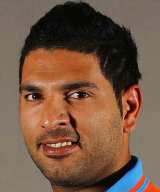 Yuvraj Singh’s Profile: When all is well with Yuvraj Singh, he hits the ball as clean and long as it has ever been hit. When all is not well, he looks so awkward you forget he can hit the ball clean and long. All has been well with Yuvraj more often in limited-overs cricket, where he can be effortless and brutal at the same time, than in Tests, though his form and consistency has been on the decline since his comeback following a recovery from a rare form of germ cell cancer in 2012. When he started off, though, his athleticism on the field and his canny left-arm spin made him a key one-day player as Indian cricket went through a makeover at the turn of the century.