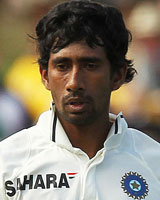 Wriddhiman Saha’s Profile: Wriddhiman Prasanta Saha was drafted into the Bengal Ranji side after regular wicketkeeper Deep Dasgupta signed up with the Indian Cricket League. He grabbed the chance with both hands, becoming the 15th Bengal player to score a hundred on Ranji debut. Though he managed only one more fifty in the remaining first-class games of the season, he was signed up by the Kolkata Knight Riders for the inaugural season of the Indian Premier League. He managed 318 runs in five games in the 2009-10 Ranji season and was picked in the squad for the first Test for the home series against South Africa. A last-minute injury to Rohit Sharma handed Saha an unexpected debut in Nagpur - as a batsman.