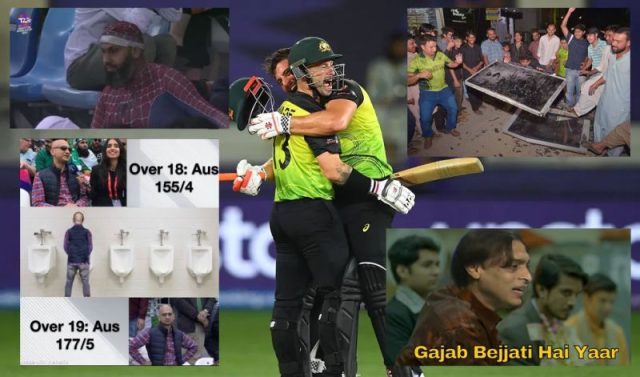 T20 World Cup 2021: In the second semi-final match between Australia and Pakistan, the formers managed to deliver drubbings to the Men in Green and enter into the finals of the ongoing T20 World cup 2021 in Dubai.

Riding on the back of Matthew Wade (41* from 17), David Warner (49 from 30) and Marcus Stoinis’s (40* from 31) commendable performances, Australia convincingly trounced Pakistan by six wickets with one over to spare to end their T20 World Cup title win hopes.

Isn’t the T20I a funny game where both the table toppers of Group 1 and 2 have been knocked out by the other team? England was the topper of Group 1 with four wins from five matches and they lost to New Zealand in the 1st semi-final while Pakistan were undefeated at the top of group 2, however, the streak was broken by Australia in the second semi-final, last night.

Both Australia and Pakistan had equal chances of winning the match until Aussie wicketkeeper-batsman Matthew Wade entered the park. Wade at a strike rate of 241 managed to dismantle the sheer pace of Shaheen Shah Afridi as he tonked him for three successive maximums in order to seal their T20 World Cup final spot.

With the win, Australia broke Pakistan’s long-standing winning streak in the UAE. Pakistan registered 16 straight T20I wins before suffering a loss to Australia. The streak started back in 2016 and it has now come to an end.

Though it was a Pakistan vs Australia match, Indian were also involved in the fixture, especially after Pakistan defeated India in the first match. Indian fans were impatiently waiting for Pakistan’s loss and fortunately, it came early in the second semi-final itself.

The Indian fans trolled arch-rivals through Twitter after the match. Here are some of the funniest reactions from Indian fans after Australia defeated Pakistan.

Skipper Rohit Sharma to be available for the Limited over series...