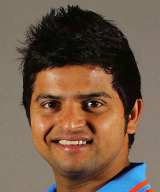 Suresh Raina’s Profile: Suresh Raina represents the new age Indian cricketer. An attacking left-hander who goes for the big shots with impunity and clears the field with a swashbuckling flourish when at the top of his game, Raina is also equally capable of attracting applause as an electric fielder in the circle. All of this, though, is tempered with an iffy technique against the short ball, which has been mercilessly exposed in Test cricket.