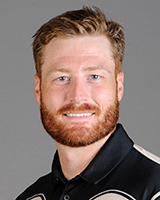 Martin Guptill’s Profile: Few players in world cricket play the short-arm pull on one leg with elegance like Martin Guptill. A right-handed opening batsman, Guptill has consistently been among the runs in ODIs notably making a double-century in the quarter-final of the 2015 World Cup, but has struggled to make a mark in Tests.