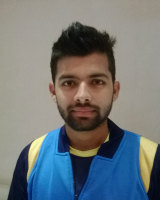 Manan Vohra’s Profile: A young opener of some promise, Manan Vohra made his first-class debut for Punjab in 2011-12, but made his mark only a couple of seasons later, with half-centuries against Vidarbha and Karnataka, and a matchwinning 187 against Jharkhand in the Ranji Trophy.