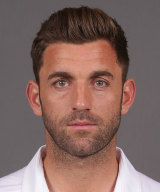 Liam Plunkett’s Profile:Liam Plunkett feared his county career was over before a move south, from Durham to Yorkshire, revived him. Rather than slipping out of the game, he rediscovered his pace and ambition in one of English cricket's story-book recoveries. England, pummelled by the Australian Mitchell Johnson, and eager to find an out-and-out quick bowler of their own, liked what they saw during a Lions recall, and he played the four Tests of the 2014 summer as a shock trooper - two each against Sri Lanka and India - before succumbing to injury.