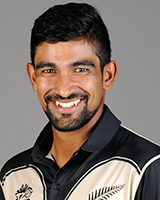 Ish Sodhi’s Profile: There is little in Ish Sodhi's statistics to suggest he is an international-quality legspinner, but New Zealand's selectors have seen enough in his aggressive approach and keen attitude to hand him a Test debut after only one full season of first-class cricket. Known chiefly for the turn he generates and the flight he fearlessly trusts, Sodhi's journey to top-level cricket has been a triumph of determination over significant odds.