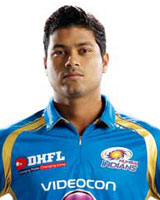 Aditya Tare’s Profile:Wicketkeeper-batsman Aditya Tare first came into the limelight after he was picked by IPL franchise Mumbai Indians in 2010. He was a part of the squad during the franchise's title-winning campaigns in 2013 and 2015 - though the presence of Parthiv Patel in the squad often denied him a place in the XI in 2015 - and famously smashed a six off Australian allrounder James Faulkner to take the side past Rajasthan Royals into the playoffs on net run rate in 2015. In the 2016 auction, Tare was bought by Sunrisers Hyderabad for Rs 1.2 crore.On the first-class front, Tare, a permanent fixture in Mumbai's domestic side, took over captaincy of the Ranji Trophy team from Suryakumar Yadav in 2015.ESPNcricinfo staff