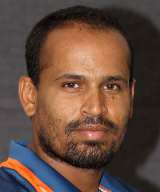 Yusuf Pathan’s Profile: Yusuf Pathan, a hard-hitting batsman and offspinner suited to the shorter formats, was first picked for the Baroda Under-16 team in the Vijay Merchant Trophy in 1999-2000. His impressive showings meant he quickly climbed the rungs to the Baroda U-19 and the West Zone U-19 sides. He made his debut in the Ranji Trophy against Saurashtra in 2001-02, but it wasn't until the 2004-05 season, by when younger brother Irfan Pathan was donning national colours, that he established himself as a regular in the Baroda squad. Yusuf ended the 2004-05 season as Baroda's fourth-highest scorer and third-highest wicket-taker.