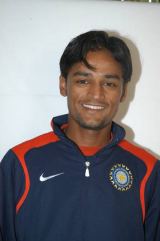 Shahbaz Nadeem’s Profile: A left-arm spinner who relies on flight, Shahbaz Nadeem took 51 wickets in the 2015-16 Ranji Trophy, becoming the sixth bowler to claim fifty or more wickets in a Ranji season. His highlight performance during that rich season came against Kerala when he picked up 7 for 64 to stud Jharkhand's big win in Malappuram.