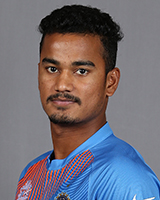 Pawan Negi’s Profile: Pawan Negi is a Twenty20 specialist left-arm spinner who can hit the long ball down the order. He represents Delhi in domestic cricket, but first came to prominence when Chennai Super Kings, his second IPL team, began to use him as a pinch-hitter on the odd occasion. On turning tracks he can be a handful with his quick left-arm spin. In 2015-16, on the back of a good season in domestic limited-overs cricket, he was selected as India's fourth spinner for the World T20. A day later, on February 6, Negi grabbed the spotlight again when he became one of the four million-dollar buys at the 2016 IPL auction - the most-expensive uncapped buy ever at the time. ESPNcricinfo staff