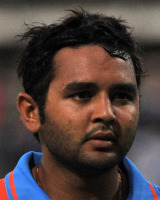 Parthiv Patel’s Profile: A pocket-sized attacking wicket-keeper-batsman, Parthiv Patel entered the international scene in 2002 when, at 17 years and 153 days, he became Test cricket's youngest wicketkeeper after making his debut at Trent Bridge. Initially, Parthiv's glovework varied from competent to shoddy, but it was his ability with the bat that got him an extended run with the national side. But, his increasingly sloppy work behind the stumps saw him lose his place in 2004, and with the emergence of Dinesh Karthik and then MS Dhoni, Parthiv went further down in the pecking order.