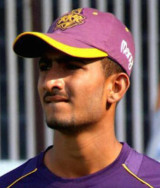 KC Cariappa’s Profile: Konganda Charamanna Cariappa, Carri to his team-mates, is a legspinner from Coorg in Karnataka. At 5 feet 11 inches, he bowls with an orthodox round-arm action. The leg break is his stock ball, and he has variations like the googly and the carrom ball. His other strength is his ability to bowl offspin without changing the grip. He shot to prominence via the IPL when Kolkata Knight Riders bought him for INR 2.4 crores in 2015. At the time he had played only a handful of Karnataka Premier League matches, but the analyst of his team Bijapur Bulls who also worked at Knight Riders helped him get a trial. Cariappa was dropped after just one match in which he dismissed AB de Villiers. In 2016, he was picked up by Kings XI Punjab for INR 80 lakh. ESPNcricinfo staff