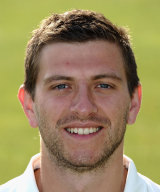 Harry Gurney’s Profile: Harry Gurney, a left-arm seamer with an ungainly action and intelligent variations, won opportunities for England in one-day cricket in 2014 in the first home series under the new set-up of Peter Moores as national coach and James Whitaker as national selector. After making an ODI debut against Scotland in Aberdeen, he acquitted himself ably in five ODIs against Sri Lanka - his best return coming with four wickets at Lord's - but only made one further appearance against India in the one-day series at the end of the season. Selection followed for an ODI series in Sri Lanka the same year - his first overseas tour.