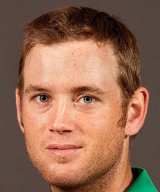 Colin Ingram’s Profile: Colin Ingram, a blond, bestubbled, bruising left-hander, is among the crispest hitters produced by South Africa's Eastern Cape. His nickname of Bozie came from "bulldozer" because his grandmother observed that he was in the habit of bulldozing around. He has done that to good purpose both for South Africa and, latterly, Glamorgan, where he has gained a reputation as a destructive one-day hitter.