Protea Corbin Bosch added to Rajasthan Royals squad as a replacement for Nathan Coulter Nile for the rest of IPL 2022: South African all-rounder Corbin Bosch has been drafted in by the Rajasthan Royals (RR) as a replacement for injured all-rounder Nathan Coulter Nile for the remainder of the Tata Indian Premier League (IPL) 2022.

Notably, Coulter-Nile suffered a side strain during his team’s first match against Kane Williamson-led Sunrisers Hyderabad (SRH) and was subsequently ruled out of the Tata IPL 2022. The all-rounder has returned home for his further rehab program.

Rajasthan Royals confirmed that the all-rounder has been roped in for a price of INR 20 Lakhs. Bosch was associated with Rajasthan Royals as a net bowler throughout the season.

“Rajasthan Royals (RR) have signed Corbin Bosch as a replacement for Australia’s Nathan Coulter-Nile for the TATA Indian Premier League (IPL) 2022. Coulter-Nile suffered a calf injury in March and has been ruled out for the rest of the tournament,” said Rajasthan Royals in the statement released earlier.

The Protea all-rounder would be available for selection in RR’s next assignment against Lucknow Super Giants on Sunday.

Sanju Samson and Co will be eying to seal the playoff spot without entering the game of net run rate. RR will lock horns against Lucknow Super Giants, today, at the Brabourne Stadium in a high-pressure game. Both sides will be raring to perform and solidify their positions.

Notably, RR began their IPL 2022 campaign on a bright note, however, the inaugural champions got derailed as the tournament progressed and began losing close matches. Despite a couple of disappointing defeats, Rajasthan has managed to stick to the top four of the points table and their next aim would be to seal a playoff place by winning both of their remaining matches. 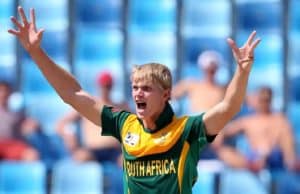 ICS News Desk - May 15, 2022
Protea all rounder Corbin Bosch has been added to Rajasthan Royals (RR) squad for the remainder of the IPL 2022 as a replacement for injured.