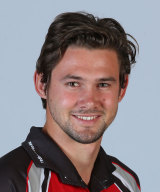 Kane Richardson’s Profile:A fast bowler who has been on the fringes of Australia's ODI and T20 teams for some time, Kane Richardson bowls with pace, aggression and a well-directed yorker. Although he has struggled to gain much traction at first-class level for South Australia, Richardson is effective in the shorter forms and in 2016 signed with Royal Challengers Bangalore, his third IPL franchise. He had been one of the big buys of the 2013 IPL when Pune Warriors bought him for USD700,000, although he ended up playing only three matches for them for two wickets at 50.50.