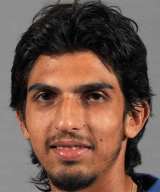 Ishant Sharma’s Profile:With a physique and attitude that is reminiscent of a young Javagal Srinath, Ishant Sharma shot into prominence during the 2007-08 Test series in Australia. Standing at 6'4", his rhythmic, high-arm action allowed him to bowl at around 140 kph. For one who started serious cricket at 14, his rise was rapid and he made his Ranji Trophy debut at 18. An injury to Munaf Patel provided him an opening during India's tour of Bangladesh in May 2007 but it was in Australia where he caught the attention, prompting Steve Waugh to call him the next best thing in Indian cricket. He showed he could move the ball both ways and his probing spell in the second innings in Perth, where he set-up Ricky Ponting, is the stuff of folklore. He continued to impress in the one-day series, clocking more than 150kph once, and ended as India's highest wicket-taker in the triumphant campaign.