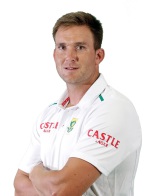 Hardus Viljoen’s Profile: Built like a fast bowler - tall, broad-shouldered and strong - Hardus Viljoen became one of those that got away from a country with an embarrassment of resources in his department. In December 2016, Viljoen signed a three-year Kolpak deal with Derbyshire to put on hold a possible international career. At the time, Viljoen had played just one Test but had established himself as the leader of the Lions' pack and was a regular in South African A sides.