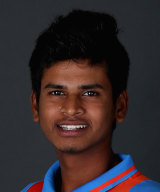 Shreyas Iyer’s Profile: Shreyas Iyer is an attacking top-order batsman capable of marrying classical shots with brute force. Iyer made headlines when Delhi Daredevils bought him at the 2015 IPL auction for a whopping INR 2.6 crore, and he repaid the faith with interest. Opening the batting, he aggregated 439 runs from 14 matches and went to win the IPL emerging player of the year award. By the end of the 2015-16 season, the hushed whispers calling for him to be fast-tracked to the national side had become a loud chorus as Iyer's career graph took another quantum leap in the Ranji Trophy. He amassed 1321 runs at an average of 73.38, including a century in the final, to help Mumbai storm to their 41st title.