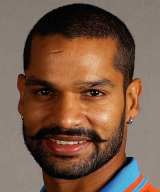 Shikhar Dhawan’s Profile: Shikhar Dhawan stunned all observers, and Australia, when he stroked his way to the fastest Test century by a debutant. That debut, in Mohali in 2012-13, came to Dhawan in his ninth year of first-class cricket after he had been written off by almost everybody, not least because India's opening combination had been fixed to the most prolific combination in their Test history: Virender Sehwag and Gautam Gambhir.