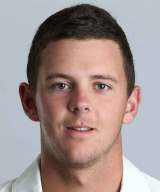 Josh Hazlewood’s Profile: A tall and accurate fast bowler who is unrelenting in his line and length, Josh Hazlewood became a fixture in Australia's Test attack as soon as he made his debut in December 2014. Although he was only 23 at the time, the baggy green had felt a long time coming, given that Hazlewood had been highly regarded for so long. At 17, he had become the youngest fast bowler to be selected by New South Wales, and at 19 he was in his first one-day international against England at Southampton, joining Craig McDermott and Ray Bright as the only Australian 19-year-olds to plat the format so soon. Hazlewood was initially chosen for Australia's Test tour of India in late 2010 but was withdrawn due to a back stress injury, and it was not until four years later that he finally played his first Test, having added significant strength to his 196cm frame.