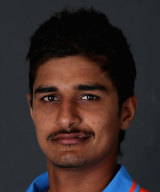 Deepak Hooda’s Profile: Nicknamed "Hurricane" for his ability to change games in no time, the big-hitting Deepak Hooda was one of India's go-to men during his Under-19s tenure in 2014. In the same year, Hooda became the second Baroda player after Snehal Parikh to score a century on first-class debut. But it was during his debut IPL season for Rajasthan Royals, in 2015, that Hooda's powerful striking abilities were more widely taken note of - he scored 151 runs in 14 matches at a strike-rate of 158.94. In the 2016 IPL auction, Hooda was picked up by Sunrisers Hyderabad for an astounding Rs 4.2 crores, 42 times his base price of Rs 10 lakh.ESPNcricinfo staff