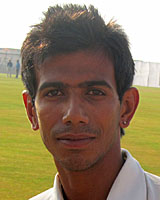 Yuzvendra Chahal’s Profile: Yuzvendra Chahal is an attacking legspinner who first attracted attention when he took 34 wickets in the National Under-19 Cooch Behar Trophy in 2009, ending the tournament as its leading wicket-taker. A former chess player who represented India at junior levels, Chahal made his first-class debut for Haryana the same year and was signed by Mumbai Indians in 2011 to be part of their IPL squad.