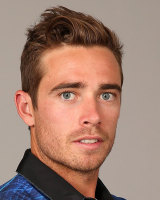 Tim Southee’s Profile: Tim Southee, a right-arm swing bowler, burst upon the international scene in great style. He was still only 19, with only one T20I cap behind him, and fresh from a Player-of-the-Tournament performance at the 2008 Under-19 World Cup when he was handed a Test debut against England in Napier. Southee responded with 5 for 55 before smashing 77 off 40 balls in the second innings with nine sixes.