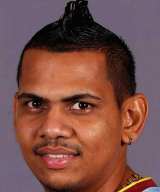 Sunil Narine’s Profile:Sunil Narine, a mystery spinner, caught the West Indies selectors' attention by taking all ten wickets in a trial match and received a call up to the Trinidad & Tobago squad in January 2009. He may not have accomplished that in international cricket , but every time Narine came to bowl, he looked like taking a wicket. His bag of tricks - an assortment of carrom balls, knuckle balls and skidders - led West Indies to the World T20 title in 2012 - the first time they claimed a World trophy since 1979.He was one of the chief architects of Kolkata Knight Riders' two title victories in 2012 and 2014 - well worth the investment they put in him. He was bought at US $700,000 in 2012, promptly became the Man of the Tournament and has been retained by the franchise ever since. Narine once bowled more overs than runs conceded in a Twenty20 match, with 21 dot balls out of 24 in the Caribbean Premier League 2014. After nearly 650 overs, he went into IPL 2016 with 216 wickets at an economy rate of 5.52. Such highs were beyond him in the Test arena though; his last match came in December 2013 and his bowling average remains a dismal 40.52.Narine ran into serious trouble with his bowling action in the Champions League Twenty20 2014. He had to rework it once before too, in 2011, with the help of bio-mechanical experts at the University of Western Australia in Perth, prior to making his ODI debut in India. But it was in India that his career began to take a nosedive. He was called for a suspect action in back-to-back matches in the CLT20 2014 and was subsequently banned from playing the final in Bangalore. He was withdrawn from the West Indies squad, who were due to play the hosts in a limited-overs series of five ODIs and a T20 in October that year. Then he withdrew himself from the squad named for the 2015 World Cup, citing the need to keep working on his bowling action.Narine was lost to international cricket for over a year, but he returned to the West Indies side in November 2015 and ran into trouble with his action again. This time it was the ICC who were on his tail and he was subsequently suspended from bowling in international cricket. He was ranked the No. 1 bowler in T20Is when he was picked for the World T20 in 2016, but withdrew from the tournament to focus on his rehabilitation. In April, two days before the start of the IPL, his action was cleared by the ICC. ESPNcricinfo staff

IPL 2020 UAE : Like any good team, SRH has developed its core team players in Warner, Williamson, Bhuvaneshwar and Rashid over...

ABOUT US
IPL, IPL 2020, IPL Schedule, IPL News and Updates