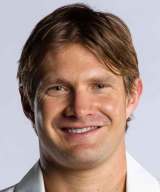 Shane Watson’s Profile: To conquer international cricket, Shane Watson first had to beat his fragile body. Despite boasting an athletic figure made for photo shoots, Watson's frame was so brittle it threatened to break him. He refused to give up. Not through recurrences of back stress fractures, hamstring strains, calf problems, hip complaints, a dislocated shoulder or a suspected heart attack that turned out to be food poisoning. He changed his training, preferring pilates to weights, gave up alcohol, but not his dream. It finally paid off in 2009, when he was chosen as a Test opener in the middle of the Ashes series. Many batsmen would have been uncomfortable with the promotion from the middle order, especially after failing when given the job with Queensland, but Watson had become used to re-inventing himself. With a history of setbacks, it was not a surprise that his first Test century became such a drama, but after two scores in the 90s and an 89, he finally brought it up at the MCG against Pakistan - thanks to a single from a dropped catch. He had earned some luck. A productive few years as a Test opener led to back-to-back Allan Border Medals but by 2011-12, injury had again interceded. He returned to the Test team in 2012 but spent the rest of his career floating up and down the order in search of a place to call his own.