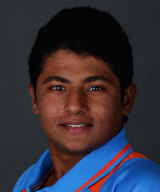 Sarfaraz Khan’s Profile:Sarfaraz Khan rose to prominence when, aged 12, he broke the record for the highest score in the Harris Shield inter-school tournament, making 439 for Rizvi Springfield in an innings that featured 56 fours and 12 sixes. However, prior to his introduction to the global scene, Sarfaraz was suspended on charges of fudging his age by the Mumbai Cricket Association, before the board eventually accepted the results of an advanced test.