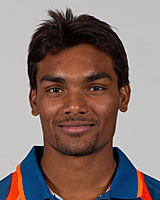 Sandeep Sharma’s Profile: A right-arm medium pacer in the Praveen Kumar mould, Sandeep Sharma is an accurate bowler, capable of swinging the ball and sending down economical spells. Sandeep, who began as a batsman for his school in Patiala before his coach persuaded him to take up bowling seriously, was part of India's Under-19 squad for the 2010 World Cup in New Zealand. He came into his own in the same event two years later, in Australia, where he took four wickets in the final, against the hosts, and finished as the joint-highest wicket-taker for India (12). As a result, Sandeep was signed by Kings XI Punjab ahead of the 2013 season. In three seasons for his franchise, Sandeep not only took 39 wickets, but was regularly employed by his captain George Bailey to bowl the death overs. Sandeep was soon drafted into India's T20 side for the two-match series against Zimbabwe in 2015, where he failed to deliver. In 2014, however, Sandeep suffered a stress fracture of the back that kept him out of competitive cricket for five months. He returned strongly to claim 28 scalps in the 2014-15 Ranji Trophy, the most for his side. ESPNcricinfo Staff