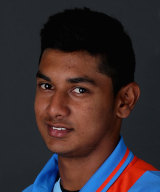 Ricky Bhui’s Profile: Ricky Bhui began his career with seven 30-plus scores, including three half-centuries, in his first nine innings at the Under-19 level in 2013. He was integrated into Andhra's Ranji Trophy side the same year.