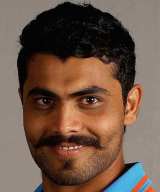 Ravindra Jadeja’s Profile: "First they ignore you, then they laugh at you, then they fight you, then you win." A fellow Gujarati, Mahatma Gandhi, could well have meant to say this about Ravindra Jadeja. The best of observers ignored his left-arm spin at first, then he was ridiculed for his three triple-centuries in Ranji Trophy, the idea of Jadeja the Test player was contested when India handed him a debut in 2012-13 against conventional wisdom, but Jadeja won them all over with over after over of unerring accuracy, and sits among the elite of Indian spin bowling now.