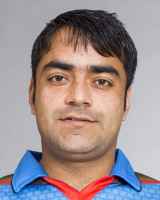 Rashid Khan’s Profile: Less than a month after his 17th birthday, Rashid Khan made his ODI debut on Afghanistan's tour of Zimbabwe in October 2015. A year and a half later, while back on tour in Zimbabwe in February 2017, the precocious legspinner fetched the highest ever bid for an Associate player in the IPL Auction. He was snapped up by Sunrisers Hyderabad for INR 4 crores (US$ 597,000).