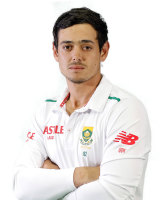 Quinton de Kock’s Profile: Quinton de Kock's fearless striking and handy glovework have earned him comparisons to greats of the game like Adam Gilchrist and Mark Boucher, early in his career. By 21, de Kock shared the record for the most successive ODI centuries - three - before it was bettered by Kumar Sangakkara. A year later, he had established himself in all three formats.