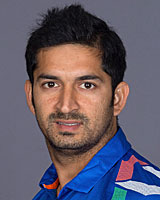 Mohit Sharma’s Profile: Although Mohit Sharma burst onto the domestic scene during Haryana's best Ranji Trophy season in 2011-12, he made his own headlines a year later. In his debut season Mohit had played just three matches when Haryana made an impressive run to the semi-finals, but during the 2012-13 Ranji season he emerged as one of the best fast bowlers in the country, finishing as the fifth-highest wicket-taker. Despite that, not many had seen or known about the youngster from Faridabad, who had been on the fringes ever since he rose through age-group cricket camps organised by the Haryana Cricket Association.