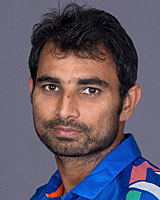 Mohammed Shami’s Profile:Mohammed Shami was India's leading fast bowler in the 2015 World Cup in Australia, when the team marched into the semi-finals and picked up 77 out of 80 wickets on offer. It was later revealed that he had played through that entire tournament - and the preceding Test series against the hosts, essentially four months - through a knee injury. His success can be attributed to his pace, accuracy and primarily his skill in moving the ball - both old and new.