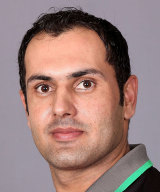 Mohammad Nabi’s Profile: Mohammad Nabi hails from a well-to-do family that moved to Peshawar in Pakistan, seeking a safe haven from the Soviet War in Afghanistan. An efficient allrounder - a strong middle-order batsman who can bowl flighted offspin - Nabi's rise, like Afghanistan's, has been staggering. He has been at the centre of the side since their time in the ICC's World Cricket League Division Five, from where Afghanistan began their rise to the international stage.