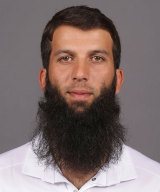 Moeen Ali’s Profile: Moeen Ali was tipped for the top long before he won his Test debut at the start of 2014. But, after building a reputation as an elegant batsman, it was his off-spin bowling that earned him the call-up when England were left reeling from the surprise retirement of Graeme Swann. While many critics dismissed him as a "part-time" bowler, Moeen had a record to compare with the best in county cricket over recent seasons. He had also developed a doosra after working with his friend and sometimes Worcestershire teammate, Saeed Ajmal. But it was his batting that stood out during his early Test appearances. He made an outstanding, unbeaten century in his second Test, at Leeds, as England went within two balls of saving the series and while he did unveil the first doosra bowled by an England spinner in the same game, he struggled to offer his captain the requisite control in the field with his bowling in his first three Tests. That changed in training for the Lord's Test against India. Encouraged by teammate Ian Bell over the need to bowl quicker to survive in international cricket, Moeen benefited from a chance conversation from former Test off-spinner Kumar Dharmasena, an umpire in the series and an on-looker at an England training session, who provided technical advice as to how to achieve the extra pace without losing any flight. It was to prove a pivotal meeting. Moeen was tighter at Lord's, devastating in Southampton and excellent at Old Trafford as he finished the series with 19 wickets; the fourth highest haul any spinner had claimed against India in a Test series outside the subcontinent and the best since 1967 when Ray Illingworth bowled 30 more overs and claimed one more victim.