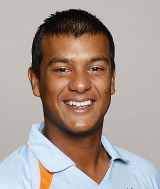 Mayank Agarwal’s Profile: A prolific opening batsman since his Under-13 days with Bishop Cotton Boys' School, Bangalore, Mayank Agarwal modelled his style of batting on Virender Sehwag. Agarwal struck 432 runs at an average of 54 in five matches in the Under-19 Cooch Behar Trophy in 2008-09 and hit a match-winning 160 for India Under-19s, in a one-dayer against Australia Under-19s in Hobart in 2009.