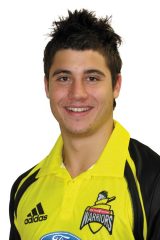 Marcus Stoinis’s Profile: A top-order batsman and medium-pace bowler, Marcus Stoinis debuted for his home state of Western Australia at the age of 19, but won limited opportunities with the Warriors and moved to Victoria to further his career. Eventually persuaded by his piles of runs for Northcote, the Victorian selectors gave him a run of games in the Sheffield Shield side during 2013-14 and Stoinis rewarded them with an outstanding 170 against Tasmania, a breakthrough innings that led to him becoming a regular in the top order. Stoinis was Victoria's leading run-scorer in the 2014-15 Sheffield Shield season and was called into Australia's squad for their limited-overs matches against England in 2015, where he debuted, playing an ODI and a T20I.