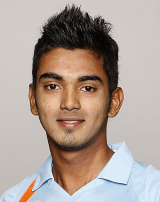 KL Rahul’s Profile: A tall, elegant right-hand batsman who can keep wicket in a crisis, KL Rahul is among the most highly rated opening batsmen in India's next generation. Rahul was a part of India's squad in the 2010 Under-19 World Cup and made his first-class debut later that year. Having taken a while to establish himself as a first-class cricketer, he enjoyed a breakthrough 2013-14 season, laying the foundation for Karnataka's Ranji Trophy victory with 1033 runs, which included three centuries, three nineties, and a Man-of-the-Match performance in the final. Rahul attracted plenty of attention at the subsequent IPL auction, and finally went to Sunrisers Hyderabad for Rs. 1 crore (US$ 166,000 approx.). He was a regular member of their side in the 2014 season, mostly as wicketkeeper-batsman, but his contributions with the bat were steady rather than spectacular. In the long format, however, his technique and application have impressed some of Indian cricket's most respected names. These include Rahul Dravid, with whom Rahul shares not just a name but also a strong rapport, regularly seeking him out for technical and mental advice. Rahul had a middling tour of Australia with the India A team in July-August 2014, getting starts each time he batted in the unofficial Tests but only managing a top score of 52. But his appetite for runs was back to normal by the time the 2014-15 domestic season began, and twin centuries in the Duleep Trophy final earned him a place in India's Test squad on their tour of Australia.